As of 1 May 2019, Silverback is no longer available to download and purchase. We will continue providing support to Silverback customers for 6 months after that date, and release critical updates if necessary.

As of 1 May 2019, Silverback is no longer available to download and purchase. We will continue providing support to Silverback customers for 6 months after that date, and release critical critical updates if necessary.

When we created Silverback, we did so to scratch our own itch for simple and affordable usability testing software. We also hoped to promote usability testing as a vital part of the design process. In that we succeeded, and the design community (and its customers) now benefit from dozens of amazing usability tools with teams dedicated to their support and advancement in ways we simply cannot. It’s for that reason we’ve finally taken the decision to retire Silverback.

Thank you very much to all our customers over the past 10 years, and happy testing!

These past months we had the pleasure of working on a new project, an online banking system for a bank here in Panama. It’s a redesign of an application that is currently in production, and as software development goes, it lacks a lot of the basic interaction and UX standards you would have expected on one.

Even tough it would be easy for us to start from the get go on a design proposal that would be an exponential improvement from what they initially had, we were very interested in hearing what the users had to say about their experience. So we proposed doing 3 rounds of usability tests: one at the beginning of the project, testing their current banking system; a second one, to test the proposed wireframes and then a final one, with the finished designs.

Each round of tests would include 3 to 4 participants, just to have a good feeling on what different user groups would tell us about their experiences and to also help us identify problems they have encountered using the banking system regularly.

The user segments were very broad, both in age and in education level. Some are over 60 year old, high level managers or CEOs; others, very young professionals just out of college, who work in the previous group’s companies; and finally, we have the staff members who have a very diverse education level, different ages, diverse familiarity with computers, etc.

After outlining the script and tasks we wanted to test with each one, we started researching different software solutions to record the video and audio of the interviews. In some cases, this might not be really necessary, and it can be replaced with a good debriefing meeting with the development team or the project’s stakeholders after each session.

In our case, the recordings would prove useful, as we had to present to the project’s managers, who, in their case, would then report to their bosses and other stakeholders inside the bank. So we needed to have an easy to access documentation that would both help them support our decisions and showcase evidence of finer details we needed to fix in the software. Emphasis in “easy to access”, since nobody wants to read a 100 page report.

Damn it, Jim, I’m a UX Designer, not a Video Producer!

The cheapest route would have been using any cameras we already own, fixed on top of a tripod; a setup useful for recording the subject’s face reactions and the conversation; but this wouldn’t solve the problem of how to record the user’s screen. One promising solution we found was Silverback, a Mac OS X application that does both things: capture the user’s screen with his mouse movement, and records his face via the computer’s webcam. So, we just needed to hit record inside Silverback to get everything and save a lot of time by not having to sync and edit video clips in Adobe Premiere down the line.

Silverback offers some functionality to help you organise your interviews: it let’s you create each project separately, and inside each of them, then you can record every interview. So we had “Banking Redesign” as the project, and then each subject’s interview under his name and date. This might sound mundane, but it helped a lot, since we started doing interviews for a separate client in the same period, and Silverback helped us maintain everything organised.

Another helpful feature is that once recorded, you can highlight parts of the video and then decide to export just these highlights or the whole video.  This is important in the case you want to create a shorter video for someone who doesn’t have time to watch the complete interview and would like to focus on the discovered problems.

On our second round of tests, we used the same setup, but instead of testing the banking system on a browser, we tested our wireframes in Adobe XD, presented as a working prototype. We had the same results: everything worked perfectly, both during the interviews, and exporting the video at the end of them.  The software never hanged even tough it recorded more than one hour of video.  We exported everything to a compatible video format (MP4), so we could then import that into Adobe Premiere and add our logo and some titles and transitions.

This setup is so simple and hassle free, that allows you to forget about the computer or video, and concentrate on the test subject, having a fluid conversation and even being able to take notes at the same time.

We had a great time doing the interviews, and we are looking forward to work on more user testing in the future using Silverback. It’s a shame there is no Windows version, as PC hardware is getting more tempting with stuff like the new Microsoft Surfaces. If you are planning to do usability tests, I would highly recommend you to to consider Silverback as an option, even in it’s demo form it can prove very reliable, as it lets you record the whole interview and export it, just with a small watermark. 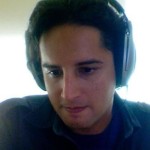